Most debaters refer to WSDC as a life changing experience. For some, it has opened a new world of potential career options, for many, it has given them the courage to stand up for what they believe in, while for others it has given them a place to belong – one where individuals believe in international understanding, free speech, and excellence. 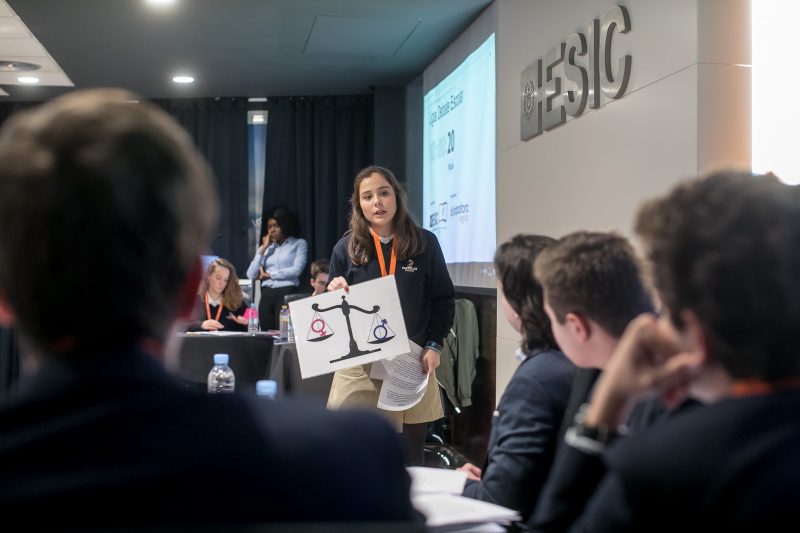 In World Schools format a team comprises of three to five people who prepare together, of which three speak in any given debate (though they can cycle who is speaking between debates). After the debate has begun only the three team members speaking in that debate may communicate with each other. Each team is allocated to either “proposition” or “opposition” on a motion that will be given to them (see below for details). They are then required to either provide reasons for or against the motion according to the side they have been allocated.

The first three speeches from each team are eight minutes in length and alternate between proposition and opposition starting with the proposition. At the end of these initial speeches, each team then delivers a “reply” speech (see below for details) of four minutes in length. This is delivered by either the first or second speaker on their team. The “reply” speeches reverse order and begin with the opposition first.

During the first three main speeches of each team, speakers from the opposing team may offer a “Point of Information” (POIs) between the first and seventh minute of the speech (these timings will be indicated by an audible signal from the judging table, normally a soft bang on the table or a clap). A POI is a short (up to 15 seconds) interjection in which one of the three members of the opposing team speaking in that debate can ask a question or make an objection to the person currently delivering their main speech – it is up to the speaker to accept or decline a POI that is offered, but speakers are expected to accept two in their speech. 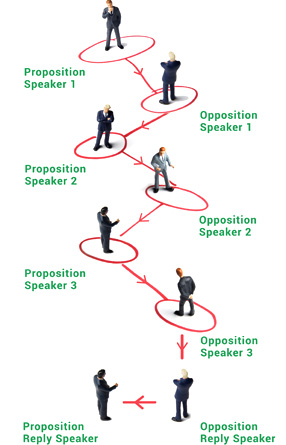 Each speaker in the debate has a different role. These rules are intended to facilitate as fair a debate as possible, both by ensuring that clarity in the topic up for debate is established and to ensure that both teams have a reasonable chance to engage with the other side’s arguments. The key thing to remember is that the speaker roles are intended to enrich the debate not to limit what a team can do.

The first speaker of the proposition is responsible for:

Similarly the first speaker of the opposition is responsible for:

Defining the motion is about giving a clear explanation of what the motion means to ensure that all speakers and judges are clear on the topic being debated. If the two teams argue about very different things, then it becomes hard to pin down what exactly the disagreements between the teams are.

Second Speakers
The second speakers in the debate are responsible for:

The third speaker’s role is to respond to the other team. The bulk of the speech should be dedicated to defeating the arguments brought by the other team in detail, whilst also defending the case that your team-mates have brought from the attacks that the other team has already made (think of this as rebutting their rebuttal!). It is technically permissible to dedicate1-2 minutes of time to additional arguments in support of your case, however this must be flagged in the first speech and the emphasis should still be placed on rebuttal.

The reply speech must be delivered by either the first or second speaker of your team; it cannot be delivered by the same person that delivered the third speech. It is also worth remembering that the order switches after the first three speeches of each team, so the opposition reply speaker gives their speech straight after the opposition third speaker and the proposition reply speech is the final one of the debate (see “Speaking Order” above). Both of these speeches are four minutes in length as opposed to the eight of all other speeches in the debate and no POIs can be offered during them.

The reply speech is intended to explain why their side has already won the debate. They do this by boiling the debate down to the two or three over-arching points of contention (often called the clashes of the debate) and presenting why their team’s side won those points. They are not expected (and will not have time) to go into detail in explaining why they won each individual argument and point made or deal with every example brought up in the debate. They are instead a high level explanation of why the judges should vote for their side. It is often helpful to think of these as a biased adjudication or a biased news reporter giving an account of what happened in the debate from their side’s perspective.

At the end of the debate, the judges will total the scores allocated to each speaker without conferring and decide whether they believe the Proposition or the Opposition team has won. 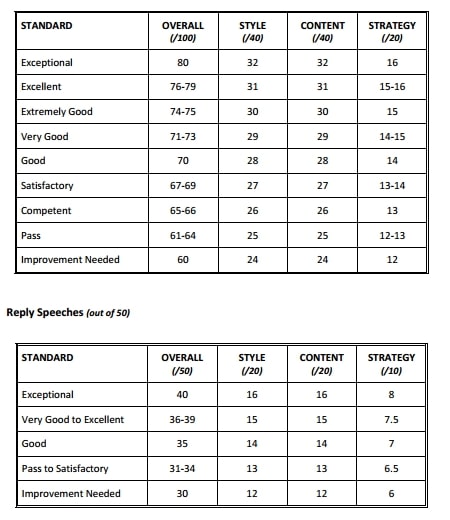 A speaker with a high content mark will present arguments that are highly relevant, with clear explanations and logic, and be succinct in flagging the impacts of their arguments. They will be consistent and thorough in their explanation of why their set of beliefs are the strongest arguments in the debate.

Style is the ability to deliver your arguments persuasively. There is no one particular style that will be appropriate for all speakers and all debates just as there is no one set of arguments that will win all debates. It does however encompass a number of general elements that improve the impact of a speech. These including how a speaker uses their voice, their use of gestures, their use of rhetorical techniques and their engagement with the audience. What is being considered is the extent to which these things are used to augment or hinder the persuasiveness of the speaker.

Strategy encompasses two things. The first is their structure and timing, the second is their understanding of the issues of the debate.

Structure and timing means a speaker who fills their time and does not under or over speak. It also means having a clear progression of points within the speech which shows a clear sense of priorities in their argumentation.

Understanding the issues of the debate follows on from this clear sense of understanding what the key issues in any given debate are. They will be able to understand which arguments and parts of an argument they must respond to in their speeches (even if their responses are not strong); they will understand what the important things to prove within their arguments are (even if this is not always successful).

Thus if a speaker is clearly attempting to do the correct things in terms of argumentation but not proving the things they set out, they may receive a high strategy mark and a lower content mark.

We use our own and third party cookies. If you continue browsing we consider you accept the use of cookies.
Accept